Once Upon a time, there lived a lion and a little mouse in a forest. The little mouse was the most playful animal. One day he decided to walk around the forest. He saw the lion, the king of the jungle sleeping.

The lion had just eaten a heavy meal. The little mouse thought it would be so much fun to play on the sleeping lion. He began running up and down and sliding down the tail, having so much fun. 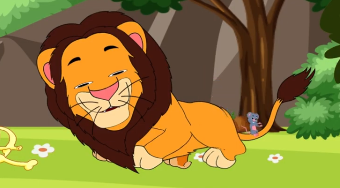 The Lion, King of the jungle woke up so angry and roared so loudly that the little mouse was very scared and tried to escape. But the lion grabbed him with his huge paws and tried to swallow the tiny mouse.

“Oh no, please, my king, spare me. I’m just a little mouse. Forgive me and let me go this time. Please!” The lion wondered, “ why do you think I should forgive you, tiny useless thing?” The tiny mouse defended himself.

“I shall never forget it. Yes, I might be tiny, but maybe one day I can help you.” The Lion, King of the jungle was touched by the fact that the little mouse can help him and released him.

“Go and do not ever mess up with me again.” The mouse was so happy. “Thank you, King, for your kindness.” 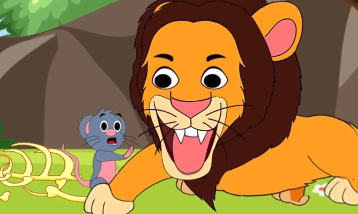 A few weeks later, the little mouse was playing with his friends in the forest. He saw The Lion King of the jungle helplessly trapped in a net, set by hunters.

“Ohh no, the king is in trouble. I must help him.” The little mouse approached the lion and said. “Sorry, my king. You don’t deserve to be here.”

ALSO READ  How To Draw A Rhinoceros For Kids

“I will free you.” The mouse climbed up the trap using his sharp little teeth. He bit the net until it was all loose and The Lion King of the jungle was freed. The lion was so impressed that even a little mouse can be of great help. “Thank you little mouse.”

“Welcome my king. I was just returning the favor,” replied the mouse.

The Lion King of the jungle called a meeting that all animals in the forest attended because they were all scared of creating trouble with the king.

In the meeting, the king of the Jungle announced that henceforth the little mouse will be the Prince of the jungle because he had saved the King’s life.

The little mouse lived so happily in the forest because since then he was allowed to freely play on the lion and slide down his tail. They became very good friends.